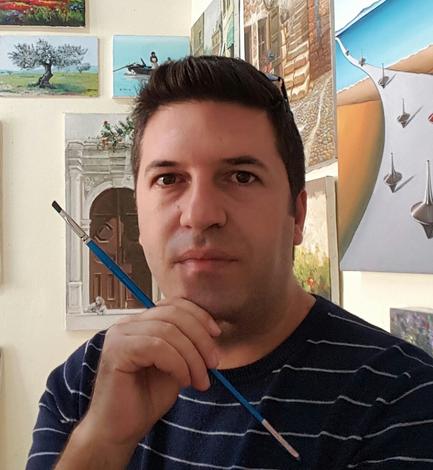 Since early age I was surrounded by art  after being influenced by my  father. He was an artist, poet, musician and painter.

After observing nature , people in the province and working with sketches, experimenting with oil paints, at  age 14

I  studied   for 4 years at art school in the hometown of Gjirokastra.

After finishing school  at age 20 I moved to Athens where the capital Helen came in broad areas of knowledge and perfection and in the company of many other artists.

I went through so many stages with oil paints until I found what suit me more.

I  work  for so  many years in Greece in different galleries and in 2015 I decided to open my own shop right  in the center of Athens below the acropolis  temple where I live with my art.

2015 was a year of success for me after participating in two international exhibition. One was in April in NYC and one in December in Miami.

In 2018 I moved in usa trying to discover and live more in the multidimensional of contemporary art ...

I have so much love and desire for painting and that makes me enter deeply in beautiful art.